R. J. Keller, author of Waiting for Spring and the forthcoming The Wendy House, my partner in the PaperRats writers’ relief YouTube series Inside the Writers’ Studio, Backword Books member,  and obsessive Star Wars fan, has recently had her independently released novel, Waiting for Spring, picked up by Amazon’s Encore imprint. Here, she answers some questions about going to the dark side.

Congratulations on Waiting for Spring‘s move to Amazon’s Encore imprint! What kind of day were you having when you heard from them, and what was the rest of your day like after that?

Thank you! The truth is I was having a rather shitty day (pardon my Bulgarian). The rural convenience store where I work, in the very rural town where I live, had recently burned down and I was transferred to a location in the city of Bangor (“city” is a relative term in Maine). My first shift was fairly hideous. The store is busy beyond belief and patronized by a rather rough crowd. Customers without proper IDs were refused alcohol and tobacco. Obnoxious kids spilled sticky Slush Puppy beverages on the counter, then burst into hysterical laughter. Insults and objects were hurled (not at the kids, although they deserved it). After ten hours of chaos, I was physically and emotionally drained, but by the time I got home – at shortly after midnight – I was too wound up to sleep. I checked my email and found a letter from AmazonEncore acquisitions editor, Terry Goodman, in which he offered to take on Waiting For Spring.

My first reaction was shock. It was one of those moments you hear about when you literally can’t believe what you’re reading. Then, of course, I “squeeeed!” a little. Or maybe it was a lot. Then I got nervous. I was afraid it might be a scam and I didn’t want to be taken in like an idiot. I’d heard of AmazonEncore, of course, but as I sat there in my Slush-Puppy-stained convenience store uniform, it seemed a little unreal that this email could actually be from them to me. Finally, I sent a copy of it to Craig Lancaster, whose novel The Summer Son had recently been acquired by Encore, with a note that asked, in part, “Is this the real AmazonEncore?” His response was, “This is the real deal! Congratulations!” After that, the Slush Puppy and obnoxious customers faded from memory. 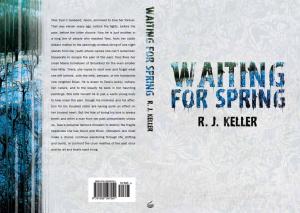 of your projects. Was it difficult to make a decision about whether to allow a publisher to assume control? And what is it that made you say yes?
To be honest, saying yes to Encore was both a no-brainer and a difficult decision. I really do like having control over my book. For example, the week before Encore contacted me I had updated Waiting For Spring’s cover and interior design. I had only just got my proof copy back from CreateSpace when Encore’s email arrived and I was very proud of how well it turned out. But the opportunities Encore could afford me, in terms of reach and budget, were very tempting. Ultimately, it was the knowledge that I would still retain a great deal of creative control over my novel, and that the people at Encore would work so closely with me, that convinced me to go with them.
.
What was it about traditional publishing that didn’t appeal to you?.

At first, my decision to self-publish was based on the responses I got from agents and small publishing houses. So many of them loved my book, but didn’t think they could find a market for it. I was very confident that there was a market for it, and set off to find it. Who better to market a book than its author? The longer my book was out, and the more I learned about publishing, I came to realize that many traditionally published authors weren’t much better off than I was. Marketing budgets are shrinking and mid-list authors are getting the short end of the stick. I’m also not impressed with the way big publishing houses are dealing with the ebook market. They’re being very short sighted.
.
What about self-publishing could you do without?
That’s a difficult question to answer, because self-publishing has been a very positive experience for me. I’m excited beyond belief about being with AmazonEncore, but I don’t feel like I’ve been saved from something unpleasant. Before this opportunity came along, I wasn’t pining away, wishing someone would come along and take a burden away from me.
.
Having been an advocate of self-publishing for some time, do you feel strange, at all, for going to the other side?
.

Well, they say the dark side has cookies, which is appealing. But for a day or two after I signed, I did feel a little strange, especially after re-reading what my friend and self-publishing advocate Zoe Winters sometimes calls the “rah rah indie!” articles I wrote for Publishing Renaissance, a pro-self-publishing blog. However, I don’t feel at all like I’m turning my back on anyone or anything by going with AmazonEncore. I’m proud of having self-published. I wouldn’t do anything differently. I’d do it in the future, if it came to that. But I’m truly looking forward to what I consider to be a new phase of my career. I look at is as building on my existing success with bigger tools.
.
Waiting for Spring has done very well – and continues to do very well – as an independently released novel. There’s a lot of conversation among writers about agents and editors who seek out self-published authors who are already doing well to avoid risk and/or so they can, for lack of a more polite way to say it, ride on the back of the author. There are also plenty of people who defend editors and agents who actively pursue authors with already proven success, arguing that it just makes good business sense. Where do you stand on this issue?
I guess I’m torn. I can understand it, absolutely. The publishing industry is, as one agent once put it, a crap shoot. I’ve always believed in my book, and always felt confident that there’s an audience for it, but I can honestly see how it could be considered a high risk. Publishing is a business and publishers need a certain number of sure best-sellers to keep afloat. Agent are suffering in that atmosphere as much as writers, so I can see why approaching an author who has found success in self-publishing is appealing to them.
.

As a rejected writer who has found success outside of that system, though, I will admit to moments of irritation about this practice. I personally think that if publishing houses looked at readers, instead of bookstores, as their customers, they’d be able to more accurately judge what The Market is really looking for and they wouldn’t be struggling to stay afloat. More importantly, maybe we wouldn’t be anticipating Snooki’s upcoming memoir.

What’s been the most surprising thing about working with a publisher?

I can only speak to how AmazonEncore works, but I think what I find the most surprising is how quickly things are going. I signed my contract in September. Here it is, a little more than a month later, and my book has already had a thorough copy-editing, promotional material is being readied, and the new book cover is ready. My head is spinning with how much has been accomplished so quickly.

Sometimes, the little things about an experience can be some of the most exciting. What were a couple of “whoopie!” moments you’ve experienced, so far, in dealing with Encore?

First of all, I cannot sufficiently express how much I love the new cover. It so perfectly conveys the tone of the book. I don’t think I’ve stopped smiling since I got it.

But my biggest moment of WHOOPIE came when I received the promo material to look over. I had to call my friend and editor, Amy Rogers, right away and scream girlishly for awhile, because that’s when it hit me: There are people who are being paid to read my book and to think of ways to encourage other people to buy it. It was The Moment for me.

How involved have you been able to be in the process?

I feel very fortunate to have been involved in every step so far. I very much appreciate how open everyone at Encore has been to my input and how much they’ve included me in the process.

What are you hoping will be the result of publishing with Encore?

I won’t deny that, in the deepest corner of my wildest dreams, I sometimes imagine movie deals and appearances on The Daily Show. But my original goal in putting my book out into the world still stands. I want to get as many people to read it as I possibly can. Encore has the resources to put it into more hands than I could ever dream of doing on my own.

What is Waiting for Spring‘s official release date, and will you be celebrating on that day?

The official re-release day is May 11, 2011. There will be much eating of pie and drinking of celebratory beverages. And I’m trying to figure out a way to share the day with my very loyal and very vocal readers. They’re the ones who have helped WFS get this far.

Are you interested in publishing The Wendy House with Encore?

If, once it’s finished, they’re interested in publishing it, I’m definitely up to letting them do so.

(I interview R.J. Keller about  The Wendy House, when it was just a work in progress,  here.)

Pre-order your copy of Waiting for Spring.